What terror will be unleashed?

Who will survive the night?

How will you save the museum?

Something haunts one of the city’s biggest museums in the dead of night. It leaves more bodies than clues and the staff will only be able to keep this story under wraps for so long before something truly gruesome happens. Whatever this creature is, it must be stopped and only the dedicated members of the museum’s inner circle can stop it.

Your Museum, Your Monster, Your Story

One of the world’s most terrifying monsters is waiting to be unleashed on a dark and stormy night as a team of unsuspecting employees at a prestigious museum prepares for a new exhibit. Two murders from the past week have disturbed them but the exhibit must open on schedule. Surely the police can handle this matter. But this is no mere homicide investigation.

Dial M for Monster is a 1950s drive-in horror/mystery story of suspense, terror, and pure evil. Writers and the Director will spend an evening crafting a dark tale of something evil lurking within the shadows of the museum after hours. These mere mortals face monstrous challenges and dire complications as players not only tell the story as it unfolds in this one-shot adventure, they also create the monster during play. No two stories will ever be the same and the pages found within reveal the complete rules for creating a heart-stopping rendition of evil run amok, eight unique lead character roles, guidelines for creating your monster using player-created clues, character & scene notes, and three optional worst case scenarios for a truly world-ending cataclysm.

Tell it with ScreenPlay, and prepare for a night of death and chaos by your own hands. It is not a question of who will live… but how many will die!

Everything You Need To Play

More than just a quick treatment for your next ScreenPlay story, Dial M For Monster will contain condensed rules and guidelines to play with all the excess fat trimmed and left to the side. Compatible with the full version of the game, this treatment is designed for both experienced Directors and Writers and those who have never played before. Plus unique lead character roles and blank scene and character notes formatted to fit the genre of old B&W horror films.

Written and Directed by: Todd Crapper
Rating: PG to R
Number of Sessions: One

In order to download this game you must purchase it at or above the minimum price of $5 USD. You will get access to the following files: 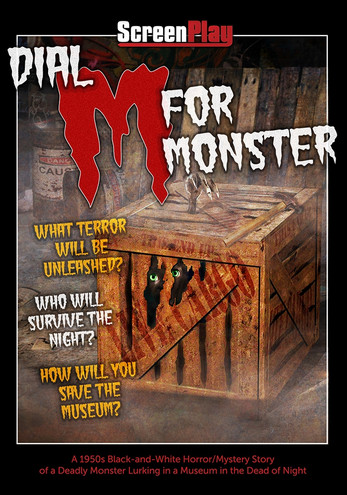